Posted by Marty Shubert
On August 6, 2020
In Rocky Mountains
0 Comments

In a fly shop in Minturn, Colorado, I inquired as to where to fish. Kathy and I were overnighting in Minturn on our way north toward Wyoming, and our schedule was wide open. The owner dissuaded me from working the nearby Eagle River since it was getting a lot of pressure from the many growing towns along Interstate 70.  It was also a poor choice since I was likely fishing in the august afternoon, where the warmer water temps over-stress fish during landing. He hit upon the Williams Fork as an alternative since it was on my way north.   In this tailwater, A cold supply of water issues from the bottom of a reservoir on its way to the Colorado River, making it a better candidate for afternoon fishing.

We drove through the mountains north of Minturn, along the Colorado River, and through the town of Kremmling. This place was familiar to me since, in my youth, it was a stop where my dad and I would get breakfast on the way to hunting for mule deer. Past Kremmling, the Colorado River cuts through an arid landscape feeding large serpentine stands of cottonwoods and willows. The access point to the Williams Fork is a small pullout from a hardball road that crosses the Colorado River and heads out into the desert terrain near a dilapidated old barn. We waited to turn into the parking area as a string of horses with riders plodded along the side of the road toward the Colorado River a mile away. Our destination was not apparent since the trail leading away from the pullout seemed to only head toward a large butte better than a mile to our front. But there was a dust-covered truck parked there, with flyrod holders attached to the roof, so it seemed we were in the right place. We soldiered out into the 90-degree heat. The walk took us through sagebrush along dusty, rocky trails, past old wooden structures, around the large butte, and finally down into a hidden oasis of trees that marked the river.

We moved downstream through the brush until we found a flat section of water. Kathy found a comfortable seat on the bank for some book-reading,  while I waded into the tail of a pool in front of her. Less than 10 minutes of casting produced a flash of gold below my dry fly, indicating that the fish had gone for the dropper nymph that I had trailing 2 ft behind the larger dry fly. I raise the rod and am fast to a big fish which charges forward up-current, moves deep, and then pushes behind a boulder. He is straining my 3.5 lb tippet and putting a pronounced bend in my 4 wt flyrod. Luckily he has stayed upstream of me in the pool until he seems to have tired, so I now try to steer him into my landing net where I’m standing in about 3 feet of water. He momentarily surfs on his side toward my landing net, then with a flip of his tail, bulls down in the water between my knees and rockets downstream into the riffle behind me. I nearly fall over in the current as I raise one leg to let my flyrod duck under it while performing an ungainly pirouette. Now I’m up against it because the waters here are very rocky and slippery, making it nearly impossible to quickly get below him for a better angle. He is now in heavy current, straining my tackle to its limits.  I hold him in position and try to ever so lightly apply side pressure to suggest to the fish to move toward a gravel bar in shallower slower water. This situation is where I always lose fish that are not well-hooked.  Luckily I have hooked him in the hard corner of the mouth with the size 18 fly. I finally beach the fish well enough for me to get my little net under him, his tail hanging over the edge. He is a magnificent Colorado River Cutthroat. I beckon Kathy over with her camera to take a few shots and then release him. I’m stoked. 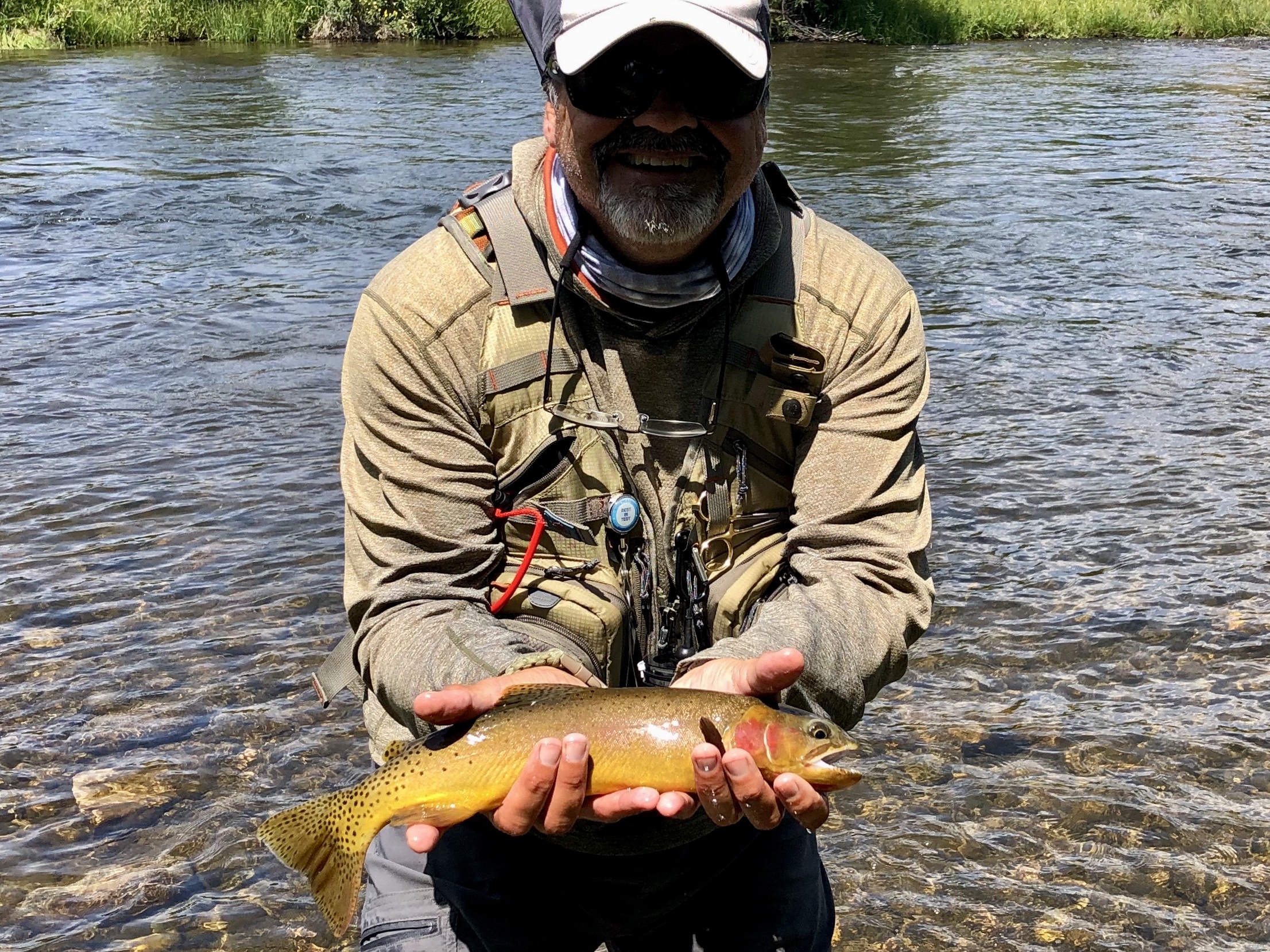 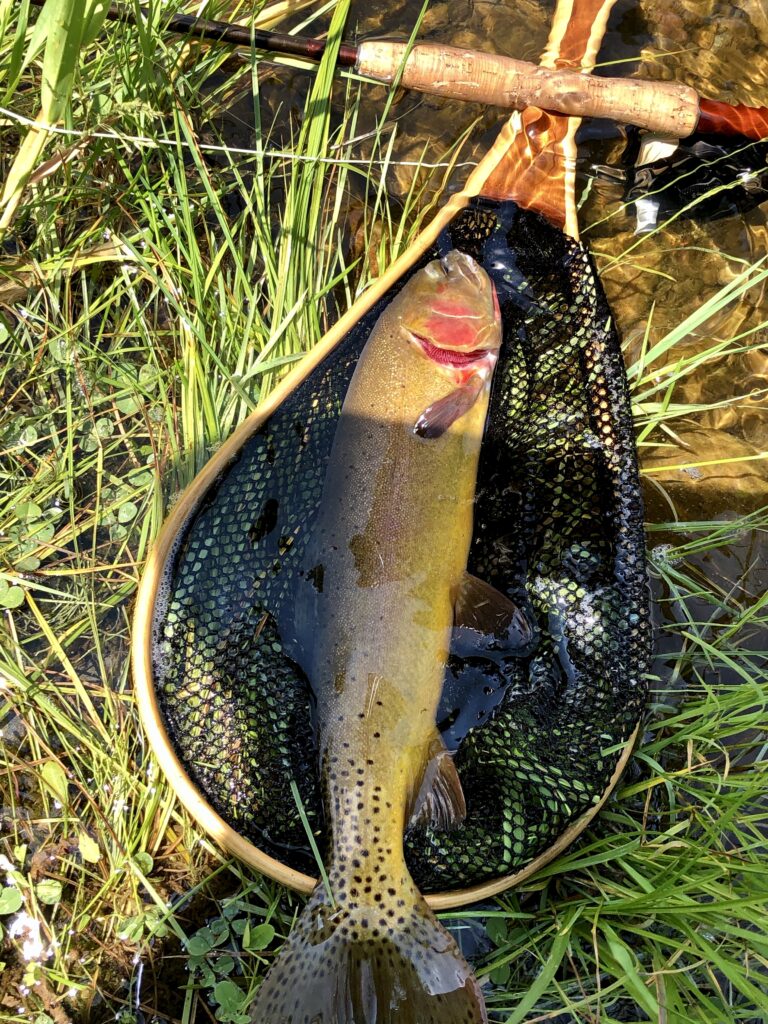 We have a quick lunch, with me fidgeting the whole time while I let the water in front of us settle down.  After gulping down a sandwich, I wade back into the pool’s central section and begin to cast to possible fish-holding areas.  I’m thrilled to soon hook a large brown trout in front of a boulder. This time I stay downstream of the fish and manage to work him into shallower ankle-deep water where I can net him. “I definitely need a larger net,” I think. Woohoo! Two nice fish and a second picture from Kathy, who is starting to wonder aloud if I should go elsewhere, so I don’t interrupt her reading further.

“This place is awesome. What’s next?” I exclaim.  I secretly hope that I can now locate a rainbow, which is supposed to be more plentiful in this river than the other two species I’ve already bagged.  I now move up into the pool’s head,  casting to a seam between fast and slow water resulting from a turn on the river, just above the pool.  I know from experience that this is often a holding area for big fish. I slowly work my casts up into this corner and get a take on the trailer nymph. The fish goes deep into the pool and stops in place, with the line humming from the tension. “This is not likely to be a rainbow,” I think, since there are no acrobatic jumps. Then he moves about the pool with strong tail movements. I can tell he’s a big fish. Finally, I get a glimpse of the fish and am thrilled to see the pink side of a massive rainbow. He’s way too big for my landing net, so I need to beach him on the gravel bar. I stay downstream of him and finally guide him toward the shallow bar. As soon as he goes onto his side and touches the stones in the shallows, he ignites into a furious run back into the hole and then turns downstream of me. I keep steady pressure on him and guide him back toward the bar, but he is now a couple of feet behind me, and the angle is not right. The small fly pops out of his mouth and leaves me standing there dumbfounded, stuttering to Kathy about how big he was. She looks at me, amused as if she were addressing one of her kindergarten students.

I finally leave my wife alone with her book and move downstream to another pool and work my way up into the same sort of corner seam as before. Here the water explodes on my dry fly as I hook another large rainbow who immediately goes airborne. He’s fifty feet up the pool from me, so he’s got a long way to go to get downstream of me into any current. I surmise that I can be ginger with this one and let him run with the light drag of reel pulsing with each of his tail strokes. Then, suddenly, to my horror, I realize that he’s headed toward a downed tree on the opposite side of the pool. Too late, he has buried himself in the snag.  The line is hung, with too steady a force, on something other than the fish.  I maintain tension and move up the pool to look for an angle that might free the line but have no luck; finally, the line parts, with abrasion evident on the end of the tippet when I reel it in. I wade across the pool and inspect the deep snag from the opposite bank, but it doesn’t appear the fish is tied up there.  He has escaped.

I walk back to where Kathy is still reading, resigned to the fact that I’ll not get that big rainbow today. There’s only a little time left in the afternoon, so I feel it’s an excellent time to work on some casting instruction with my wife. We wade out near the area where I found the big bow earlier and begin the lesson. She is throwing the line well enough but needs to tighten her loop on the forward cast, so I take the rod from her to demonstrate, and then miraculously, my line goes tight as soon as it hits the water.  It’s another nice brown trout. I offer the rod to her. With a peeved look, she says, “No, that was supposed to be my fish, now it’s yours. I’ll get the camera.” The fishing lesson is over, and it’s time to hike back to the car.  I’ll have to be content with two book-end browns and a nice cutthroat. I resolve to buy a bigger net at the next fly shop that I visit and further decide to be a little more patient in my casting instruction with my wife. 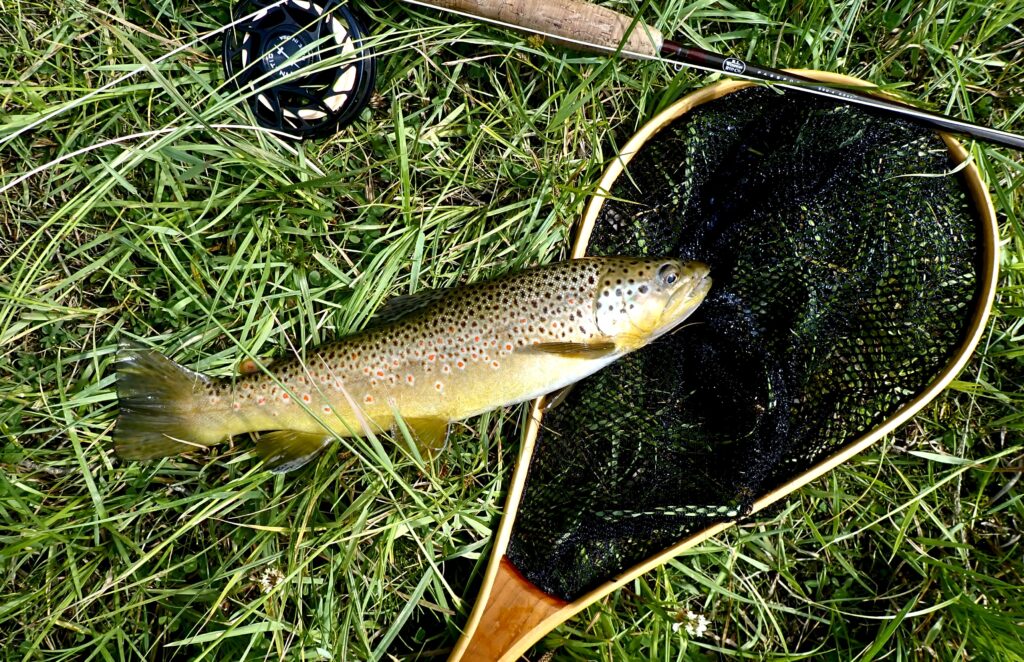