Posted by tpmoorhead
On June 1, 2019
In British Virgin Islands
0 Comments

After sailing for a couple hours out of Virgin Gorda through deep blue seas, the island of Anegada appears as a long green strip of land dotted with a couple buildings on a horizon of light blue water off the bow of our sailboat. We have to carefully navigate the narrow channel through the reefs to the mooring field, where we’ll spend the next few nights in our Catamaran sailboat. While most of the islands in the BVI Archipelago are closely grouped steep-cliffed volcanic islands with deep blue water around them, Anegada is nearly flat and surrounded by aquamarine and turquoise water.  This is due to the shallow reefs and intervening flats from the 18 mile long Horseshoe Reef that shelters the island from the heavy seas. It lies 15 miles north of Virgin Gorda and is the only inhabited coral island of the BVI, with the highest point about 28 ft above sea level. It is the hydrography of reefs and flats, which makes this the only likely spot in the BVI to target species like bonefish. While I wasn’t headed to Anegada just for fishing, I was pleasantly surprised at the quality of the fishery I found there. In hind-sight I wish I had planned another day there.

As a break from our sailing trip, my buddy Jon and I scheduled a half-day charter with guide Kevin Garfield (anegadaflyfishing.com). An early morning departure from the main dock at Anegada was coordinated, so a short dingy ride from our sailboat mooring was all we needed to start the day out. Kevin is a soft-spoken slight-framed fellow with an impressive intelligence regarding this sport and other subjects. Throughout the morning, he set us up with multiple shots at bones and a couple of opportunities to target 30-40 lb tarpon. Fishing focused on the eastern end of the island, with us poking around coral heads, shallow sand flats and mangroves. There was not a considerable difference between the high and low tides.  We started with sight-fishing for bones in shallow 1’ deep water but found that unproductive. 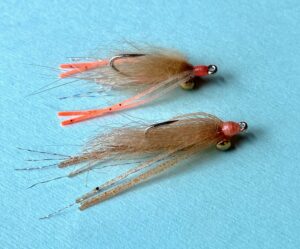 We then moved out into the deeper flats and focused on mudding bones where the  active muds looked like someone had thrown a bag of flour into the aquamarine water. Size 6 and 4 tan-colored gotchas produced the best results with color and size not being as important as weight. Out here, you had to get the fly down in front of the fish. To fish the variable depths, one should bring plastic-eyed, chain-eyed, and lead-eyed flies. I also used the RIO Flats Pro Stealth Tip line on a second 8 wt rod to use its intermediate sink tip to get down to the mudding bones. Kevin was excellent at working with our individual casting abilities and positioned the boat to handle the ever-present wind. He also accommodated two of us casting at the same time with the person with better skills working the back-cast off of the transom. His boat has a hull that doesn’t bounce too bad in the chop but then can’t get real skinny. For sight-fishing in real skinny water, you need to plan on wading, so flats sneakers/boots are advised. I had multiple break-offs until I figured out these bones were larger than I expected, more like Bahamas bones than Belize bones. Still, a 10 lb tippet handled them nicely.

In June, it was hot on the flats, and a 1/2 day trip made sense. A swim off the transom of the sailboat afterward, followed by a swing in a hammock under the palms with a light breeze and a rum drink, was a great way to cool down and contemplate the vagaries of the vagabond life. Lobster dinner anyone?