The Flats of Belize are coral rubble flats that lie behind a fringing reef of the Turneffe Atoll. They are often just a few inches deep, with water streaming over the barricades of the reef onto coral rubble mixed with sections of eelgrass and sand. In these flats, shallow water channels are just slightly deeper than the flats themselves, acting like highways for the fish such as bonefish, triggerfish, and boxfish that feed amongst the coral. On my first trip to Turneffe Atoll, I was amazed to see sizable parrotfish with their green-blue backs half out of the water, rooting amongst the shallow water for tidbits.

Much of the fishing in Turneffe is done by wading the flats. You wear boots here to protect your feet from the jagged edges of the coral. Elemental and instinctual are adjectives I use for this fishing. You stalk your prey with cat-like patience and focus. This is where you seek out bonefish, the grey ghosts of the flats that seem to melt into the continuously varying bottom colors and contours. If you’re lucky, you’ll see them spook momentarily due to the shadow of a passing bird, or maybe you’ll catch a glimpse of a tail or dorsal fin as they root through the coral and sand. Sometimes they are pushing a bit of water the opposite way of the wind, or perhaps you see the faint shadow of the fish on the bottom. Rarely do you see the fish itself underwater.

You might attribute the bonefish behavior to guile or wit as evidence of substantial learning, but I suspect it is due to highly tuned instinctual reactions to the deadly environment that the fish live in that makes the bonefish so elusive. I asked our guide why the bones so eagerly expose themselves on these shallow flats in 6-12 inches of water, and his response was immediate, “there’s barracuda in deeper water.” The occasional lemon shark cruising by in knee-deep water drives the point home. At one point on my first day, I observed a large needlefish in full flight bounding through the surface of the water with the bow wave of a large barracuda hot on its heels. The Needlefish escaped, only by flying into the air and landing 4 ft from the water on the sand beach. It then flopped around a couple minutes until it worked it’s way back into the wash on the beach. Don’t know if the barracuda stayed in the shallows waiting for it, but we saw no commotion after it re-entered the water. After seeing this, I was sure that the one barracuda fly I had, a needlefish imitation, would come in handy. 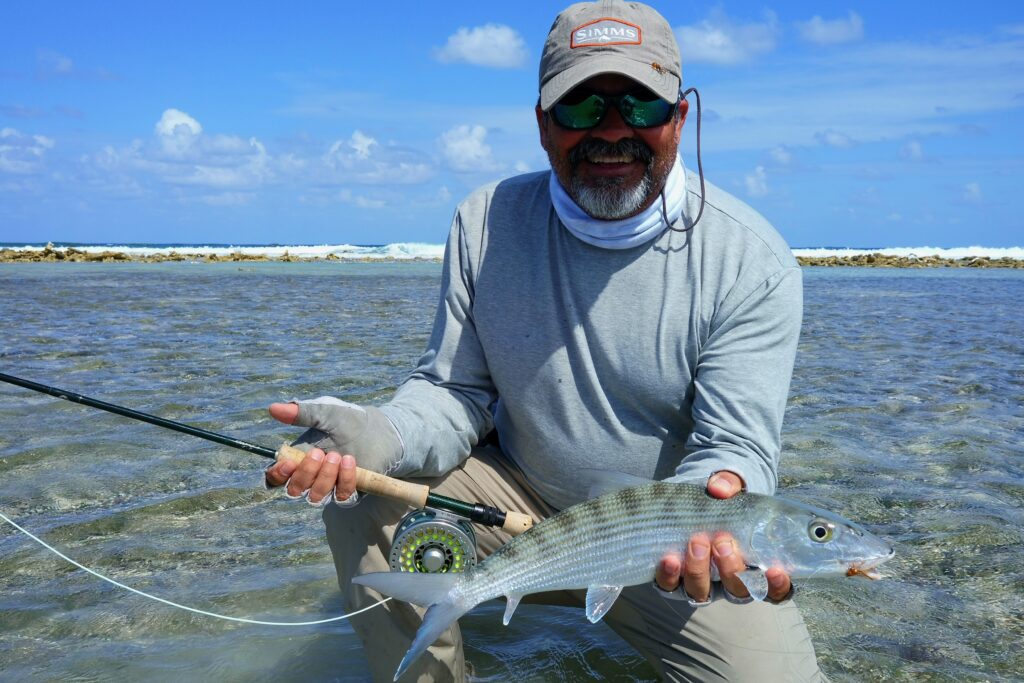