Posted by Marty Shubert
On June 2, 2022
In Bahamas
0 Comments

We were 6 days into a 10-day-long sailing trip out of New Providence, Bahamas, down the Exuma island chain. The round-trip adventure would take us down to Black Point Settlement and back to Nassau, encompassing about 230 miles in length, with an anchorage off a different cay every night. Half of the trip would be through the Exuma Marine Park, where fishing is prohibited, but we would try in the other half of our journey to find fish, particularly bonefish.

Today we were lucky, with A clear-blue sky above a sea painted in shades of vibrant blue bands varying from royal blue to aquamarine. This was a perfect Anchorage for our 45 ft Catamaran, lying 300 ft off-shore in 10 ft of crystal-clear water over white sand and with little current. The winds were moderate for sailing, great for keeping us cool at night, but heavy enough to influence our fly-casting strategies. Our intent was to take the dingy around the point of Pipe Cay to an extensive series of flats that looked to be the perfect bonefish territory, but the white-capped waves beyond the point made us think better of it. Instead, we would focus on the leeward side of the cay with far more limited bonefish habitat.

Out to the front of our anchorage were rocky low cliffs topped by palmetto, various greenery, and the occasional coconut palm. The cliffs were arrayed in a series of points, or peninsulas, with white sand beaches in the coves. Unlike the others, one cove seemed to go deeper into the cay and showed shallow sand flats that dog-legged to the right, out of our view. This was our best shot, we surmised, for finding bones.

We two couples drove the dingy to a small beach adjacent to the mouth of the flats, where my buddy Dennis and I left the girls to sunbathe and snorkel while we reconnoitered the estuary before us. It was about 300 ft across with a slight inclination toward a center deeper channel that we guessed was about 4 feet deep. The right-hand windward side was all mangrove and looked like an excellent place for bonefish on a rising tide. However, the tide would likely strand us and make us swim back across. Besides, we didn’t relish upwind casting with a back-cast over the high mangroves. Instead, we stayed to the leeward side, slowly wading up the flat while affording back-cast room from the mix of mangrove and razor-sharp coral Ironshore on this side. As we moved along the flat, all we saw of fish were the small Yellowfin Majora that I’ve learned are common in this terrain. A small 3 ft lemon shark slowly swam by us in 2 ft of water. Then, toward the end of the flat, we spotted a long green motionless shape. We studied it for a while and watched it hover slowly forward. It was a massive barracuda at least 4 feet long. As we watched, he slowly turned and came down the shoreline near us, passed us 30 ft out, went halfway down toward the mouth, and turned back along the mangrove on the far side. He then centered on the channel to our front. I had only bonefish flies, but Dennis had a single needlefish imitation with wire bite tippet. He tied it on his 8 wt fly-line and made a nice cast about 10 ft to the front of the beast. A couple strips of the fly got the cuda’s attention, but the fish seemed disinterested in a needlefish brunch. He drifted back to the center of the channel and couldn’t be coaxed out again. We called it a day and clambered onto the sand and iron-shore beach to quickly move back to the dingy and our waiting spouses. Tomorrow, in the morning, we’d come back for Mr. Cuda. 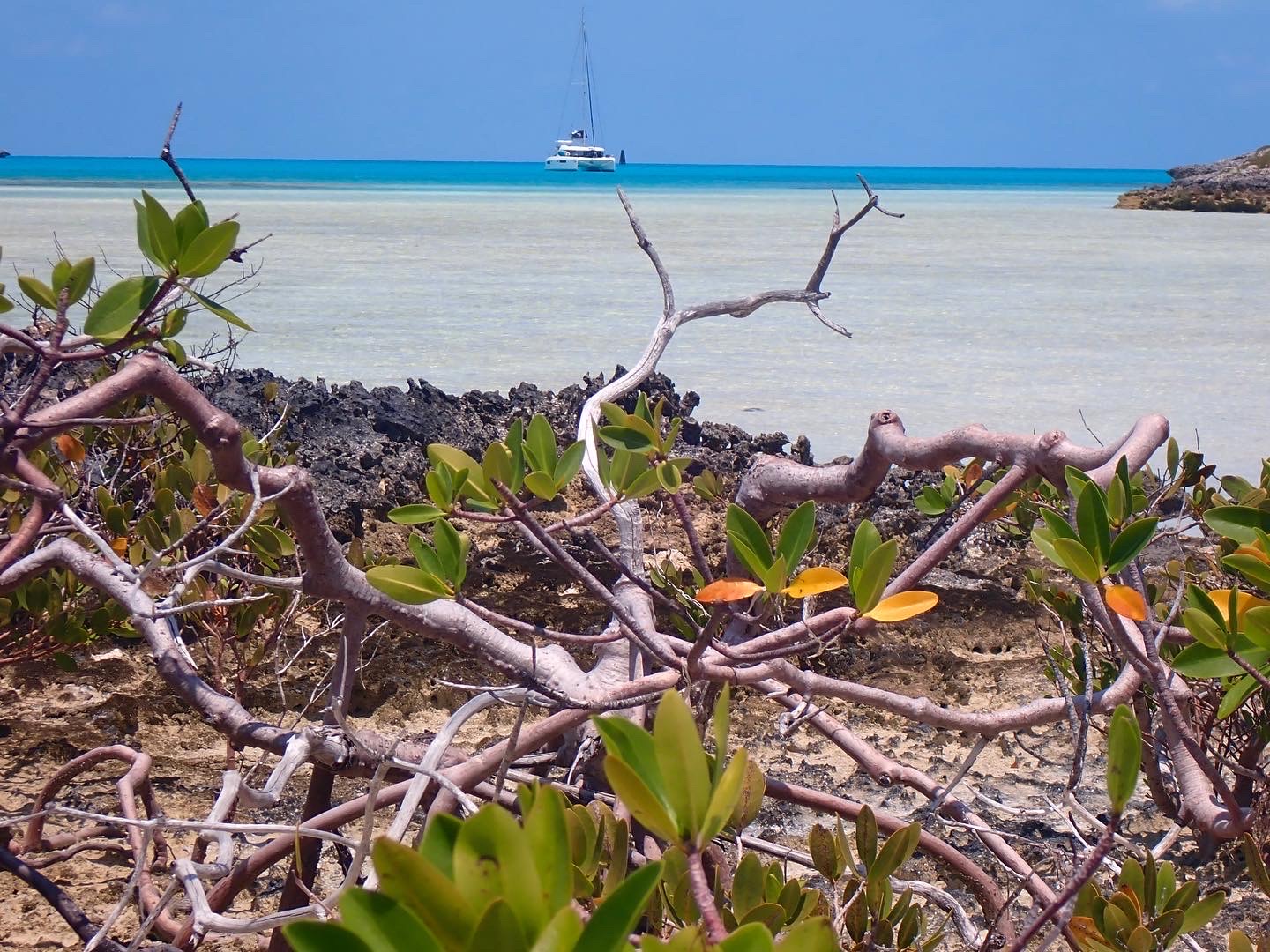 The following day, before sailing, after a couple cups of coffee, Dennis and I tell the ladies we’ll be out for a quick try for Mr. Cuda. “Be back shortly,” using words that should never be uttered to fishermens’ spouses.

I have my 12 wt rod rigged with a five-inch imitation of the local baitfish. This pattern successfully teased up a small lemon shark to take the fly the previous afternoon. But something tells me that the barracuda and those lemon sharks are in that lagoon area for a reason. Needlefish are not on their menu. I grab my 8 wt rod with my favorite shrimp pattern rigged, just in case.

We park the dinghy as we did yesterday and wade in the same way. We encounter a few small lemon sharks this time but don’t find our target barracuda. We are standing on the Ironshore looking for Mr. Cuda when I suddenly sense that the clumps of eelgrass in front of us have shifted. Maybe a wind and wave change or perhaps something else. I start looking at the bottom kaleidoscope differently now and note some nuances of change. Then I see a definitive profile of a single bonefish swimming on the edge of a white sand deflation in the channel to my front. I cast toward him but fall short by better than 10 ft. Still, I strip the small gotcha shrimp fly in case there are other fish I’ve not seen. Suddenly I feel the familiar take of a bonefish and strip-strike the hook home. “I’m on,” I say to Dennis, who’s 20 yards up the flat from me. I never saw the fish take the fly, so I don’t know his size, with no other evidence than his searing initial run. Until that moment, I had no idea how many bonefish were there. With my hooked berserker of a fish racing around the flat, we can see pockets of many bones darting away from him. I guessed them at 20 but would later double that figure. I yell to my buddy, “Might need a picture of this one.” Dennis begrudgingly gives up his position above me and wades through the mangrove and muck. On landing the bone after a good fight, I see that he is smallish, and I return him to the water and quickly resuscitate him within seconds. The bonefish swims off just as Dennis arrives at my side. “Thought you wanted a pic?” he asks. “Sorry, felt he was a little small.”

I feel bad about having my buddy hump over to my position for nothing and relinquish my spot on the sand and coral outcropping to him for another shot at the bones, slowly merging into a larger group. As we watch, we see an occasional flash indicating that they are already back to feeding. Their movement slows, making it more difficult to see them, so I move up to where Dennis was before, which gives me a better angle with the sun to my back. The fish have now moved into a large group coming up the side of the channel to our front. They are head-on to me so I can see the greenish backs better and call for Dennis to cast. The fish turn off from where his fly lands, but they’ve set me up for a 60 ft cast to the front of the leading fish. I have to take the shot and am rewarded with a solid aggressive take. This bone immediately rips down-channel taking me into the fly line backing, then turns right, toward the mangroves on the far side. I lower the rod and palm the reel to pressure him into stopping. He shifts his vector up-channel between a coral boulder and the mangrove. I now have to raise the rod high to avoid scraping my line on the coral. He reverses direction two more times behind the obstacle as if to know that he might rub the line off. Then he rounds the boulder and heads straight for me. I dunk the rod tip and fly line in the water to get any benefit possible from the viscous drag there while I reel furiously to bring in the increasing slack. He turns again and allows me to catch up on the reel. His speed has decreased noticeably now, and his runs are less lengthy. There are a couple more reversals in his path, and I’ve walked him over to where Dennis is. Soon he’s resting in my left hand inverted, which tends to quiet the fish and allow me easy access to the hook in his inferior (bottom-oriented) mouth. Dennis snaps a quick pic for me, and I get the bone back in the water. This time, it takes a while for the fish to swim away under its own power. It’s then that I notice the agitated lemon sharks. This bone, which has slowly joined the school, seems a bit big for two 3 ft lemons, but the commotion has stirred them up. They press into the school of bones from different directions keeping the school moving until it is evident that one fish is struggling more than the others to keep up. One of the lemons attacks and rolls with the bonefish in his mouth. The shark chews, releases, re-attacks, and chews again until the bonefish is obviously dead. Lesson re-learned for me. I saw this in Belize and made an effort to keep the bones I caught in shallow water behind me, with me running interference from any predators until they were better revived. I don’t know if it would have helped here, but I feel that I meddled a bit in mother nature’s balance.

Dennis and I wait a bit for the school to calm down. They have separated from the lemons but are still moving continuously. I move to a 2 ft high perch atop some of the Ironshore and call out the school’s position to Dennis, who puts fly after fly in front of them with multiple refusals. We conclude that it’s done for now and that the shark activity has shut them down. Besides, we left the sailboat hours ago into this arid flat without a drop of water to drink. We forgot the sunscreen also and will suffer for the next few days with the backs of our legs burnt from the early sun. The girls were thankfully amused when we arrived back at the boat so delayed. They have come to be a bit skeptical of our prognostications regarding how long we will fish.

This singular event, where I find myself exploring an unfamiliar island from a sailboat on a pristine anchorage, is imprinted upon me as the quintessential experience. The austere beauty of this arid place and the raw nature of its’ life struggles is a memory of inestimable worth to me. I consider myself very lucky to have found bonefish on this trip, much less land a couple of these fighters. 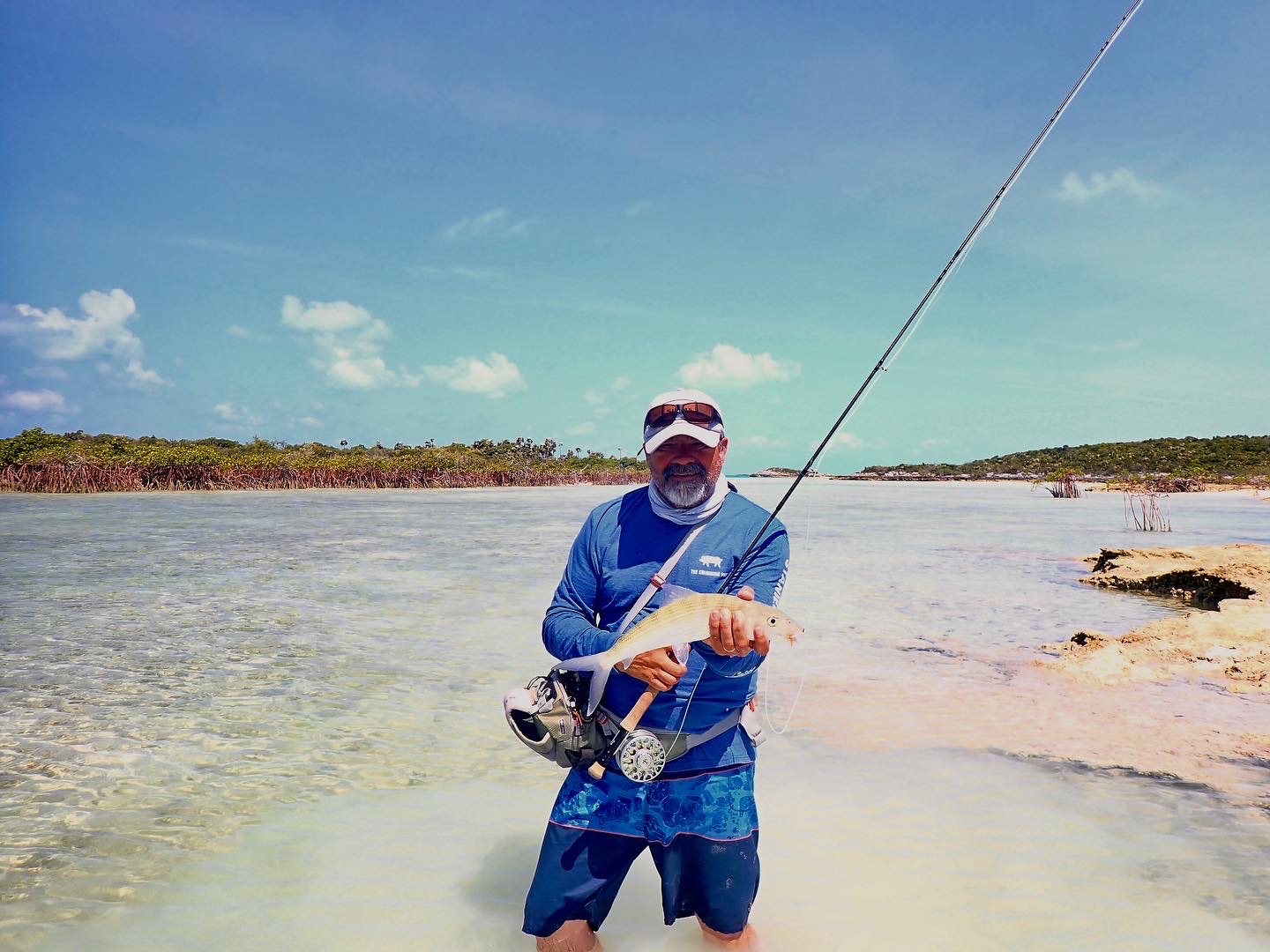 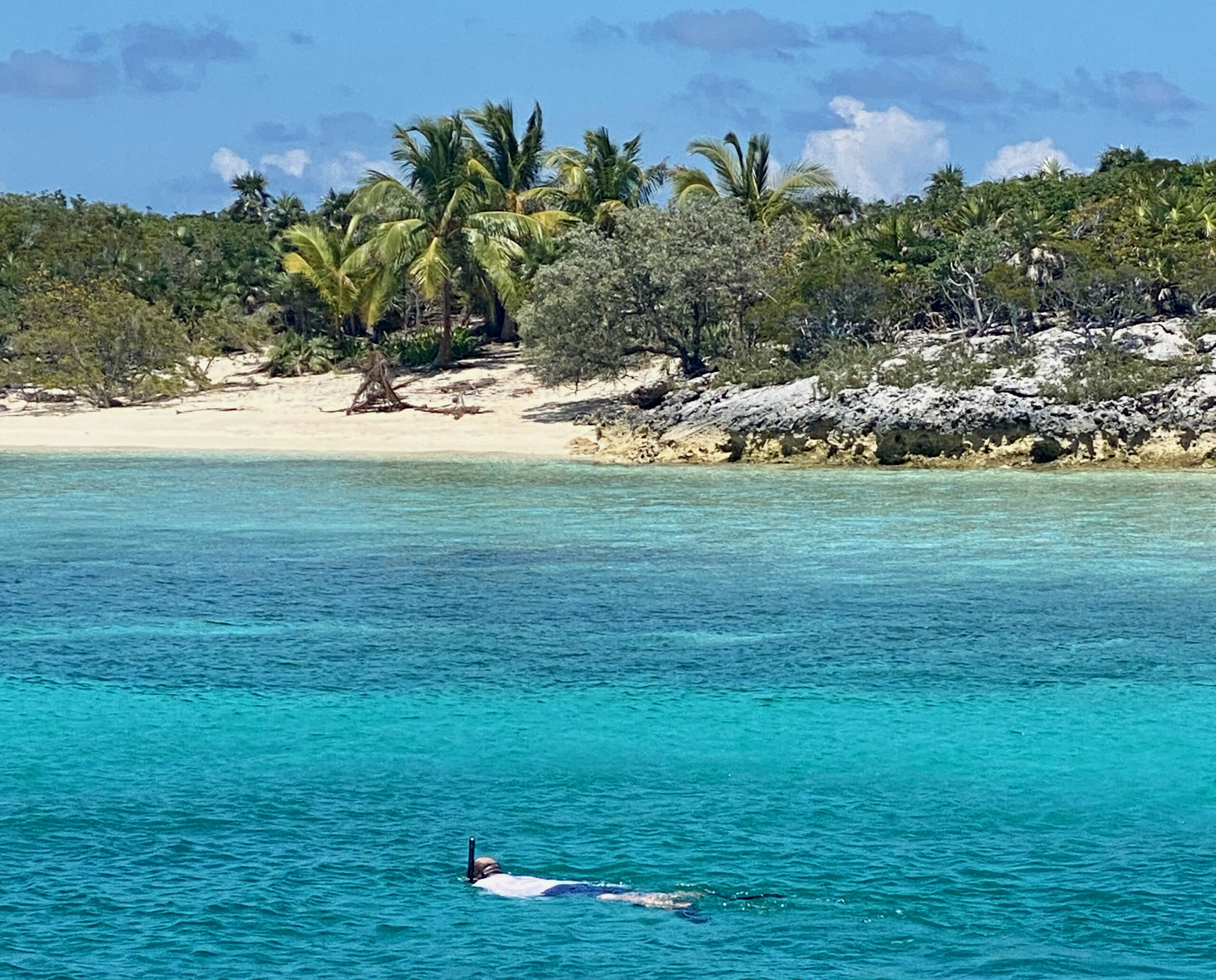