Turneffe Atoll has been on my personal radar for many years. As a young man, I had heard of the diving there, and then later about the incredible fishing. This place not only provides for excellent diving but also is one of the best places to pursue a saltwater fishing slam of tarpon, permit, and bonefish. Its history, which included a short period when Blackbeard the pirate dominated the waters around it in 1717, made it even more enticing. Its geography alone was absolutely appealing to me, in that it is the largest of three atolls off the Belize barrier reef, along with Glover’s reef and Lighthouse reef. The atoll’s reef is approximately 30 miles long and 10 miles wide, encircling a large lagoon area comprised of a network of flats, channels, and smaller lagoons dotted by more than 150 mangrove islands and a handful of higher cayes with littoral forest. It’s home to a vast array of fish species, crocodiles, lobster, conch, and even manatee. All this territory is shared by local fishermen in small fish camps and three diving and fishing resorts. One of these resorts, Turneffe Flats Lodge, was my first choice for a stay, and in January of 2017, on a whim, I called them and booked a week in April.

Three months later, Kathy and I arrive in Belize City early and drop our bags at the boat, a combination fishing, and dive boat, worn but evidently well maintained. We deliberately gave ourselves time to make the boat if there were plane delays. You literally did not want to “miss the boat” since it only went out to the Flats Lodge twice weekly. To fill the time, we walk down the street a couple blocks to the Ramada, an older established hotel on the waterfront, a strange combination of formal and informal accommodation. It’s as if it was struggling with trying to strike a balance between a bygone opulence of being a singular tourist destination and the new reality of being less desirable with the newer generation’s bent toward informality. The formal indoor air-conditioned bar offers some respite from the tropical swelter of the still street at midday that we’ve found to be oppressive. After a drink and appetizer, we are ready to join the fray at the poolside bar on the floor below. Belikin beer, the local brew, is the order of the day, as we pull up a couple stools under the palmetto thatched awning, our backs to the pool that is filled with a handful of frolicking kids and a couple of adults nursing drinks. As we sip our beers, we watch the comings and goings of the tourists in the bar, guessing at who, like us, is waiting on the boat and would be joining us for the week on Turneffe Atoll. We are wrong on most accounts.

Two beers later, we are back at the boat, jump aboard, and find our way to the flybridge in anticipation of getting cooled down once we are running. It seems the majority of the other guests had the same idea, and we make our introductions. The lower deck is occupied by several of the employees of the lodge who are quietly conversing. There are the kitchen ladies, fanning themselves in the still heat of the marina, and some male maintenance folks, all waiting for their transport out for the weekly employee turnover.

The trip out to Turneffe is about 2 hours, leaving the bay of Belize City, traveling outside the barrier reef that extends 400 miles down the coastline, and then crossing the deep blue channel to Turneffe Atoll. The waves are steep and big in the channel and keep the captain busy steering and throttling the engines to keep the ride reasonably comfortable. As we approach Turneffe, the atoll is described by a long strand of 1 story high mangroves stretching unbroken for miles in front of us. The dark blues of the channel turn to turquoise as we move inside the outer shallow reef system. We head toward a small cut in the mangroves, with no more than a little white sign marking the entrance. No channel markers or buoys here like I’m used to in the Chesapeake. We motor down the narrow channels between mangroves, sometimes at around 10 knots and sometimes at a crawl, with the clear flowing water filled with grasses and seaweeds. We get fleeting glimpses of dark shadows of fishes, moving away from the boat, leaving us to wonder as to whether they are tarpon, snook, or cubera snapper. Occasionally we startle a salt and pepper flock of birds, a striking blend of white egrets and black herons. At one point, the channel is so narrow that the mangrove branches are rubbing the flybridge from both sides. Soon, we are accompanied by several swooping swallows, a sign that we are about to enter the inner lagoon of Turneffe. As we clear the mangroves, a vast expanse, several miles across, of green-brown water is suddenly there before us. The captain throttles up the diesel engines, and we make good time across the lagoon toward a far bank of mangroves. As we get closer to our destination, a large gap in the far mangroves exposes the fringing reef beyond and the blue Caribbean beyond that. We round a point, and there is Turneffe Flats, with a long dock, a handful of red-roofed, white-walled buildings among palm trees, and a handful of flats boats tied up waiting for the morning. The reef is about 1/4 mile out from the resort. It is an idyllic setting that is stunning to behold for the first time.

Our introduction at the lodge is accompanied by a rum punch to get us through a briefing by the management team on various schedules, guides, and other administrative matters. We then spend the rest of the night getting to know the guests that we’ll share the lodge with over the next few days. We meet Paul, an ophthalmologist from Montana, in search of his first bonefish, and his son Arly, a decided fishing enthusiast. They are good earthy folk, quiet, but with a simmering love of fly fishing. Arly will later join me on the flat in the morning at dawn, landing a small bonefish before breakfast.

We then expand our little group with the enticement of sipping rum and cigars that I have brought along. The conversation is lively. Two Colorado boys, Brad and Clint, are joking around and are obviously longtime friends. Brad, a commercial success, is retired at 40 and is obviously used to the road. He comes off as a party animal to some degree. His buddy Clint describes him aptly as one of those guys you either hate or love from the get-go. I find him to be extraordinary. Clint is hands down a good trout fisherman, completely ate up with the sport, and with a cell phone full of mind-boggling big trout as proof. He uses his business to work in Wyoming and Colorado to keep him engaged in the pursuit of these trout, so I look forward to hearing about this first encounter with saltwater fly fishing. We carry the conversation late into the night and leave with a good buzz. It’s hard to call it a night and breakaway from the beautiful moonlit night on the breaking reef. It’s mesmerizing. Eventually, I’ll get back to my bungalow and to the pre-checks of my gear for tomorrow’s first bone-fishing venture, but for now I’m transfixed by the beauty of this place and this moment. 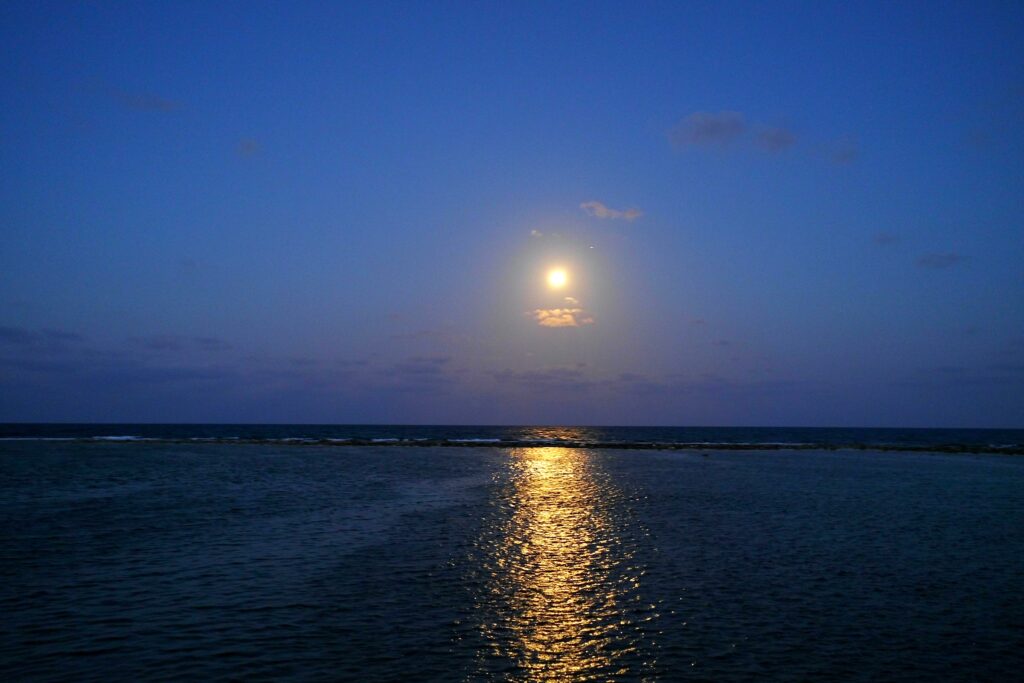