Pops (Winston Cahral) is a stocky man with large hands, wearing fishing gloves, the palms of which are completely worn out. The gloves are there purely as a measure for keeping the sun off the backs of his hands. His palms are heavily calloused from handling the pole and are not in want of protection. He’s wearing a long sleeve plaid shirt sporting the lodge logo, buttoned to the top button, obviously prioritizing reducing sun exposure compared to keeping cool. He wears his signature long blue shorts with his lower legs and feet exposed to the rude sun, making them dark as chestnut. His face is the same chestnut brown behind large Costa sunglasses, the only expensive item in his wardrobe. A guide’s greatest weapon in the tropics is a pair of practiced eyes behind a pair of high quality polarized sunglasses.  His face is partially shaded by the bill of a light grey New York Yankees hat, probably bleached out from its original dark blue by the years of sun exposure.

Pops steers the boat by sitting on the poling platform with legs dangling and feet wrapped around the engine throttle and steering arm. While idling slowly forward, scanning the mangrove edges for the scimitar tail of permit, he occasionally reaches into his shirt pocket for a clean napkin, wiping his sunglasses clean while still on his face. At one point, I see him putting some thread-bear socks on. “We gonna wade the flats?” I ask, thinking I should be grabbing my wading boots. He shakes his head. “No, I’m burnin my feet,” he mumbles. He then resumes his station on the poling platform, continuing to look for a permit. We’ve been at it hard since 7:30 am, and it’s now going on 3 pm. My eyes ache, along with my legs, from standing on the foredeck with rod in hand, continually scanning for these elusive targets.  But I feel this is the price to pay for permit. Pops has pulled out all the stops today and driven us down the southwest side of the atoll, around the islands of the middle-lagoon, and now along the eastern mangroves in the central part of the atoll. We are finally out of mangrove edges to cruise alongside and decide to give up on permit. We elect to make a scorching run in the Dolphin flats boat to a small island in the atoll’s northern flats where we found some sizable bonefish on previous days. 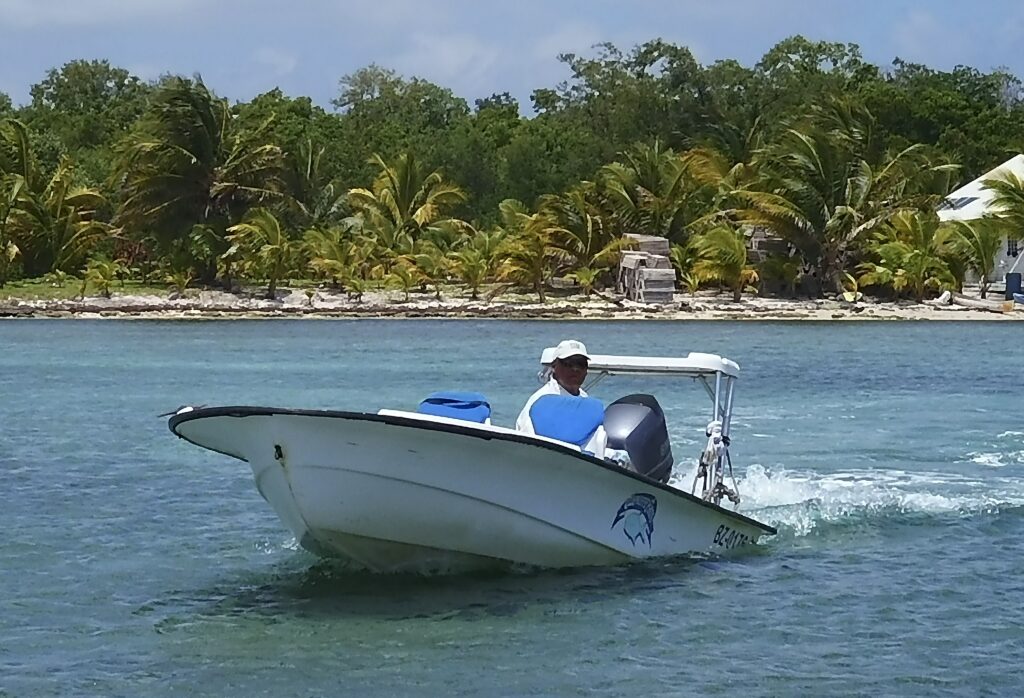 My last day, my last hour, two hook-ups, and two break-offs. The first fish breaks off the tippet at a wind knot that I injudiciously left in. I tie on an entire new tippet and then a “Pops bonefish bitter” fly, named after my guide by its famous fishermen inventor, Craig Mathews. Pops has already waded half-way across the flat, evidently leaning forward to make sure this isn’t a skunk day. I shuffle over beside him and pick a good casting position to target a big tailing bone that he is pointing out. The fish takes, the line rockets through the rod-guides, and I manage to clear 20 ft of looping line from the water at my feet and come tight on the reel. The reel is now screaming as I watch 100 ft of fly line and then 50 yards of backing go out. I am in a dream of complete wonderment, thoroughly enjoying this final-day moment, palming the reel lightly to increase the drag above the light reel drag I have set. I am snapped out of my reverie by Pops. “Use the reel. I don’t palm”. Then “Reel, don’t let him rest. Reel”. The fish is way down-range on the flat now and has turned 90 degrees left toward some mangrove shoots.

The line is now picking up weed floating on the flat. Pops says, “ weed, he can leave anytime.” Perplexed at his remark, I am not ready to give up so easily. However, I am at a loss as to how to improve my situation. But for me, doing nothing is not how you handle an urgent situation. Make a decision, act on it, and then follow it through. Vacillation is what defeats you. I move toward the fish and raise the rod higher; the weed slides down the fly line toward the fish. Moments later, the line goes slack, the ten pound-test leader broken. “Maybe I should have lowered the rod and moved to a better angle,” I think. I tie another fly on and wade further into the flat, hoping for other bones, but they’ve bugged out. We call it a day, and I make sure Pops knows I appreciate the work. I’m smiling ear-to-ear. He offers a half-day of fishing tomorrow, knowing that I am scuba diving with my wife in the morning. The wind forecasts are wrong for that, though, and he would have to drive the boat 10 miles to pick me up from the dive boat. I decline and free him up for the whole day to fish with other guests.

The next morning Doug and Dave approach me at breakfast. They are fishing with Pops and glad of it, knowing how successful and happy I’ve been this last week. I tell them to ask Pops about the small island up north and then give them a needlefish fly that I caught 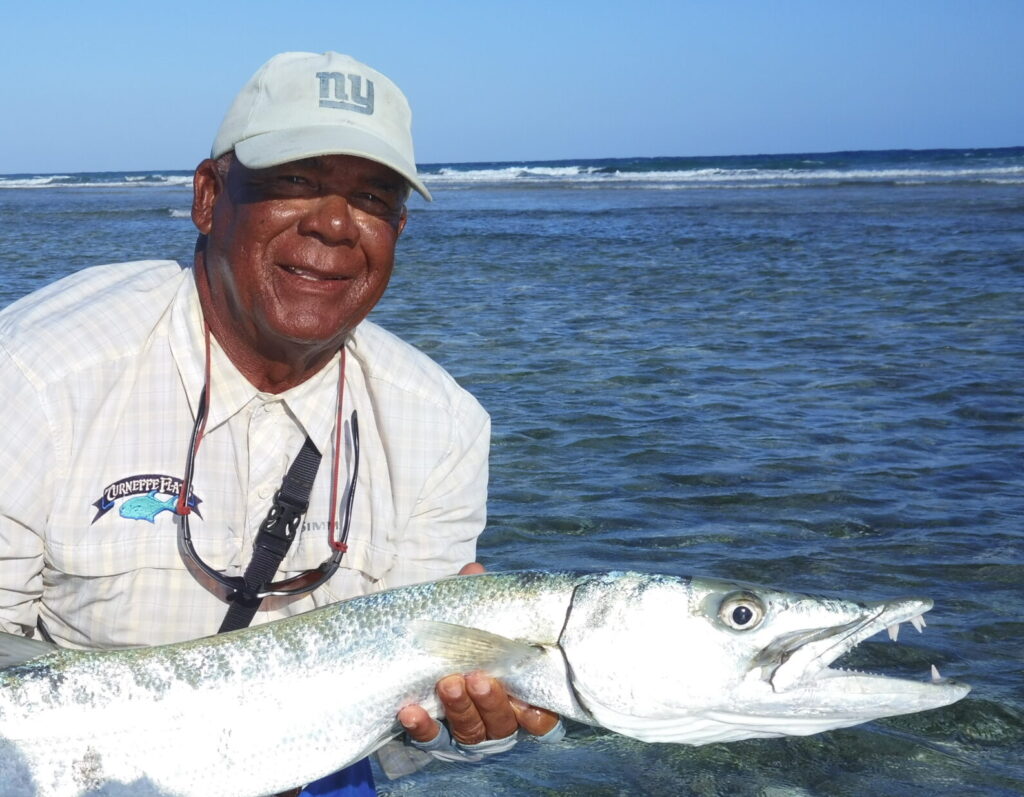 a massive barracuda two days earlier. That barracuda was the catch of the day and made for great storytelling in the bar over beers. It earned me and Pops cred with the other guests since we had seen the fish on one of the flats two days earlier and told the fellows that we were going after him. The camera shot of Pops holding that big bastard showed that I was not overly prone to exaggeration and that Pops could deliver. Dave and Doug are pumped 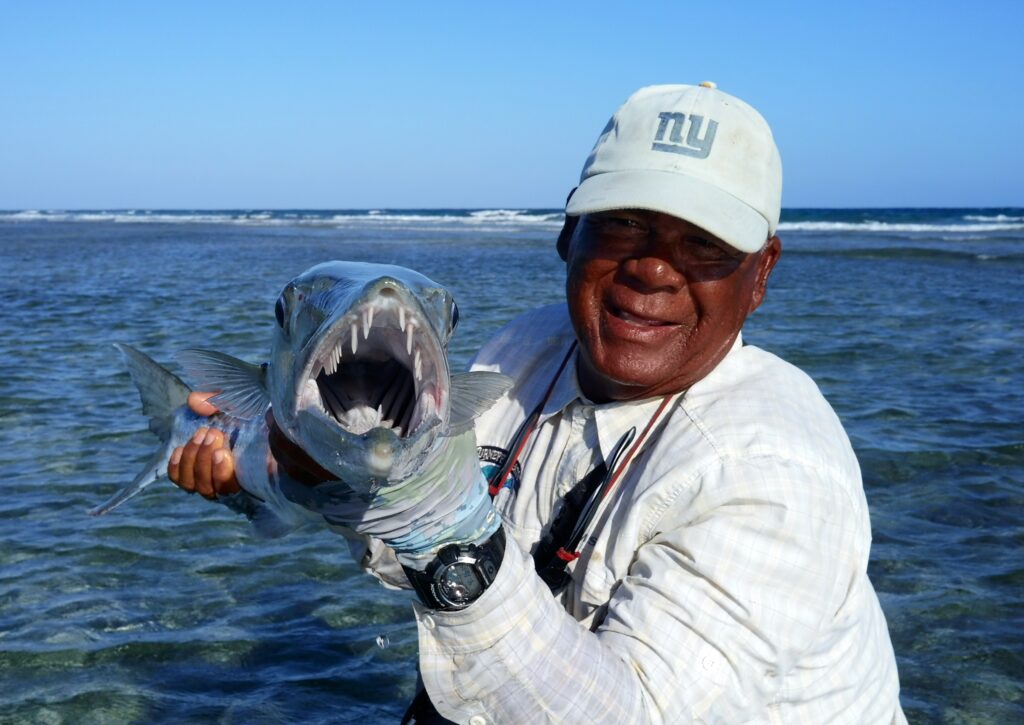 After leaving the dive boat later that afternoon, I meet Doug and Dave on the lodge veranda. They had a great day catching several bones and having shots at permit. It made their trip.

When he shows up at the lodge later that afternoon, I yell,” Pops, now you find the permit?” We both are smiling broadly and shaking hands. In his lilting rhythmic accent, he tells me, “you should have seen dat big dawg. ya missed a nice permit”. He gives me his home address so I can send a pic of the big cuda we caught. He also adds, ”and send me a picture of you and dat big bone.” “I will,” I say. We talk a bit longer, take some pictures together and then go our separate ways, him to the guides over in the corner of the veranda and me up to the bar. After getting my drink, I return to the get-together on the veranda, and we exchange glances. I wonder as to whether I should join him and the guides but think better of it. Instead, I insert myself into a knot of guests rapt in conversation, not recalling the subject of discussion. About 10 minutes later, the guides are dispersing, and I yell, “Hey Pops,….next time”. And we point at each other and smile. A sufficient goodbye in my estimation, with me acknowledging my choice of guide for the next time, and him recognizing me as one he enjoys sharing his boat with. We are the only guide/customer team to exhibit such, which is not lost on the rest. 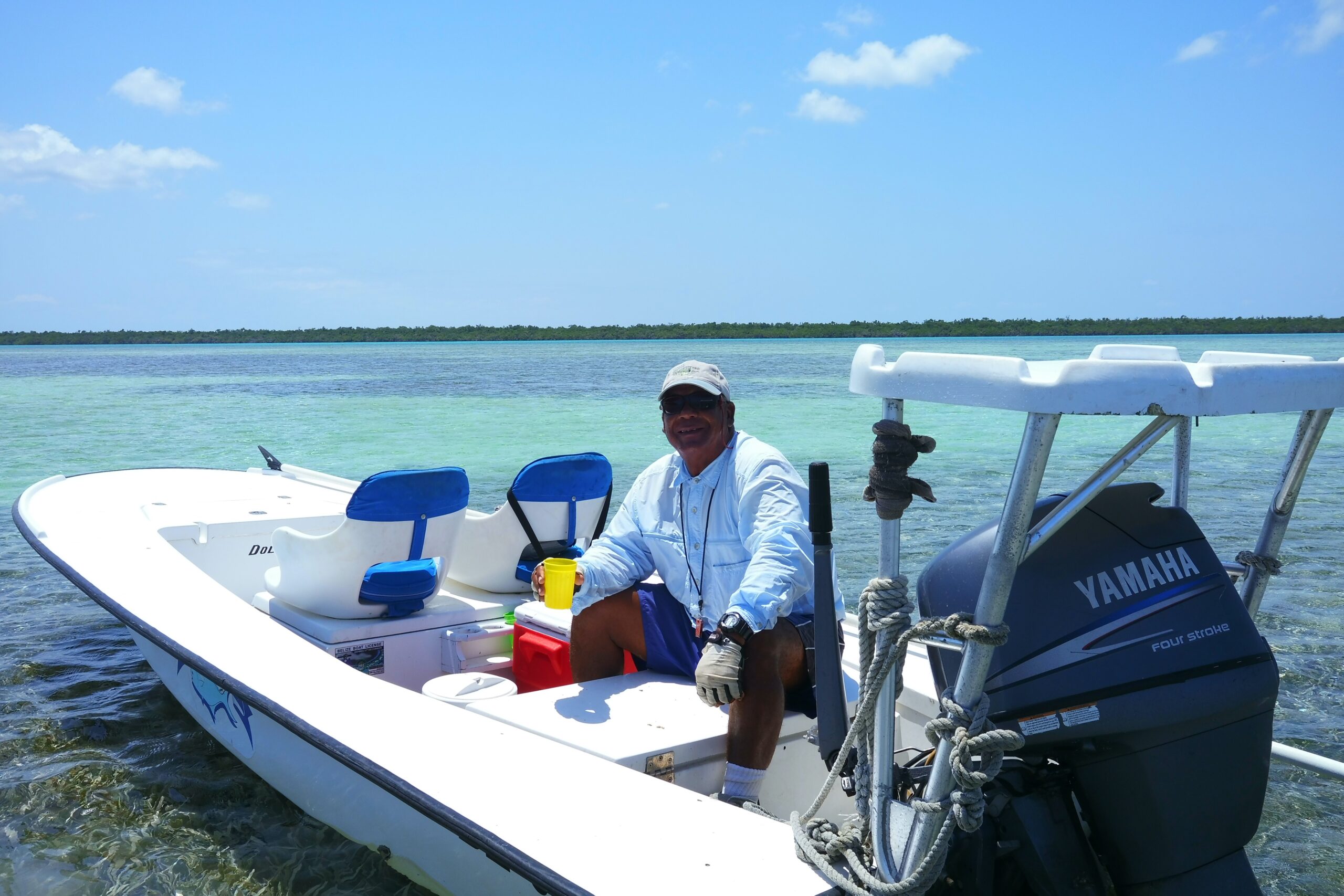 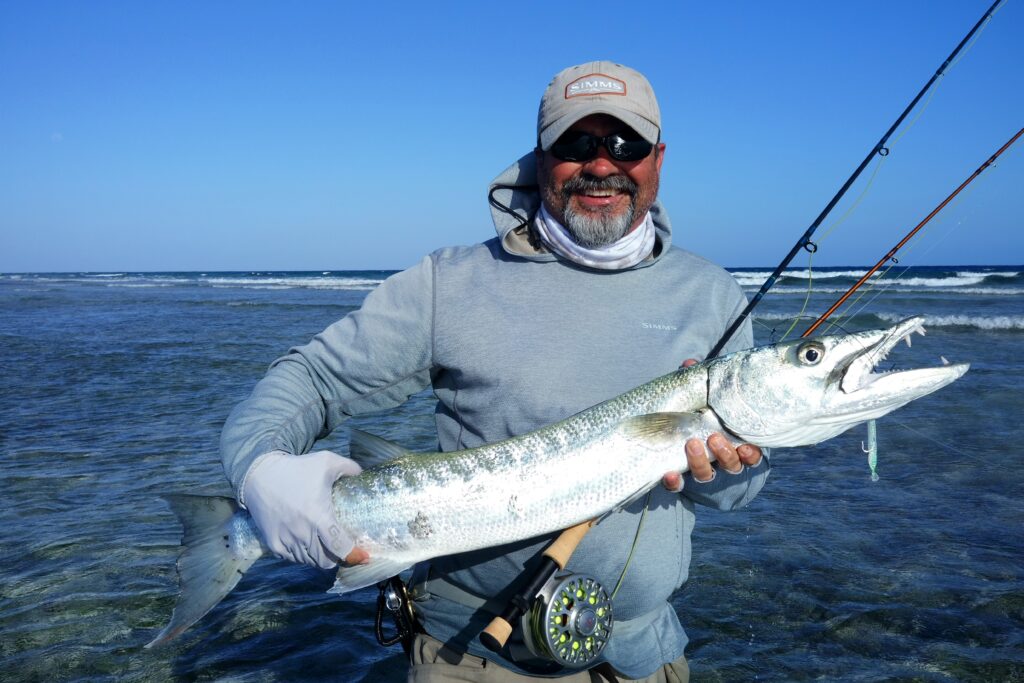